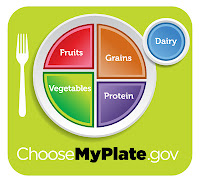 New ways calories can add up to weight gain.

Whether you are just starting a New Year’s diet or struggling to maintain a healthy weight, a provocative new study offers some timely guidance. It isn’t so much what you eat, the study suggests, but how much you eat that counts when it comes to accumulating body fat.

The findings are the latest in a string of studies to challenge claims that the secret to healthy weight loss lies in adjusting the amount of nutritional components of a diet—protein, fat and carbohydrates. 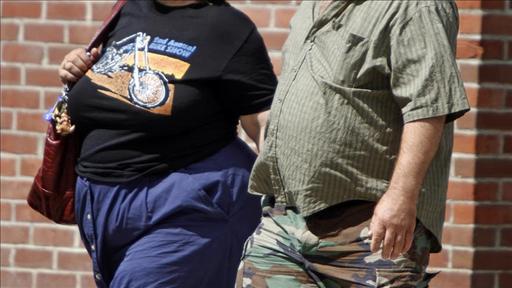 The diet industry has offered dozens of strategies recommending raising or lowering carbohydrates, protein or fat.

In the study, to be published in Wednesday’s issue of the Journal of the American Medical Association, 25 young, healthy men and women were deliberately fed nearly 1,000 excess calories a day for 56 days, but with diets that varied in the amounts of protein and fat.

While those on a low-protein diet—about 5% of total calories—gained less weight than those on a normal- or high-protein regimen, body fat among participants in all three groups increased by about the same amount. Typical protein consumption is about 15% of calories, while the U.S. government recommends it make up between 17% and 21% of total daily calories. 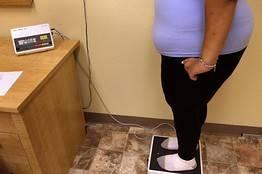 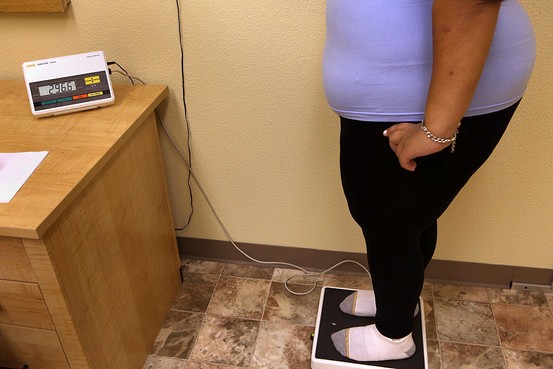 Getty ImagesA woman stands on a scale during her weekly weigh-in at the Wellspring Academy, a California school to help teens lose weight.

“The body was confronted with excess calories, but it didn’t care where they came from,” said George Bray, a researcher at Pennington Biomedical Research Center, Baton Rouge, La., and lead author of the report. “The only thing it can do is put them into fat.”

The findings suggest that it matters little whether a diet is high or low in fat, carbohydrates or protein, it’s calories that build body fat.

“That’s a very important message,” said Francisco Lopez-Jimenez, an obesity researcher at Mayo Clinic, Rochester, Minn., who wasn’t involved with the study. “Weight gain depends primarily on excess calories, regardless of the composition of the meal.” 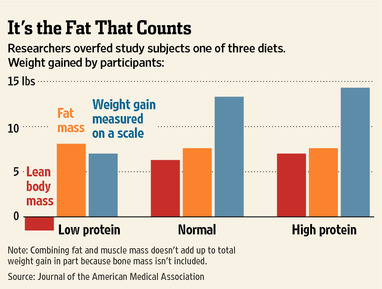 More than 60% of U.S. adults are considered overweight and more than 30% are obese, defined as having a body mass index, or BMI, of 30 or higher.

There was a potentially detrimental effect of the low-protein diet: Participants had a reduction in levels of lean body mass. Those whose diet was 15% or 25% protein had an increase in lean body mass, a reason why they gained more weight than those on low-protein fare.

“There is no health-related benefit to a reduction in lean body mass,” said Dr. Bray. “That’s not what you want to happen.”

BMI, a calculation based on height and weight, is widely used to describe the weight status of a population. But it is increasingly controversial when used to assess the health of individual patients.

Edward Livingston, a gastrointestinal surgeon and researcher at University of Texas Southwestern Medical Center in Dallas, said the fact that patients in the study gained less weight on a low-protein diet but still accumulated substantial body fat suggests relying on BMI measurement may be misleading patients and doctors about obesity risk.

“If your diet is poor, it might be the fat that hurts you,” said Dr. Livingston, who wasn’t involved in the latest study.

“You can’t just look at BMI. That’s a function of your body weight. You ought to be looking at the fat,” he said, and not just body weight.

The patients in the Pennington study ranged in age from 18 to 35 and had BMIs between 19 and 30. (Between 25 and 30 is considered overweight.)

They lived at the center’s metabolic unit for between 10 and 12 weeks and were fed the 1,000 extra calories a day for the final eight weeks of their stay.

Dr. Bray said the more than 50,000 extra calories were roughly equivalent to the excess calories the average American consumes over a decade. 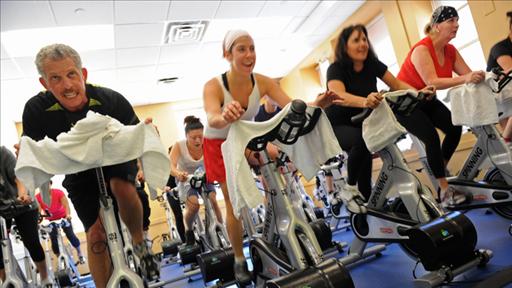 “It was quite a load,” he said, but if they spread the calories out over a longer time “it would take us years to see the changes.”

Carbohydrates were held steady at about 41% to 42% of calories while fat levels varied with the protein regimen.

Regular exercise wasn’t part of the participants’ routine. Physical activity was controlled and participants were monitored to make sure they ate all the food they were given.

After eight weeks, all participants in the study gained weight. The 16 men and nine women made similar gains. The low protein-diet group gained about seven pounds, about half the 13.3 pounds added on by the normal protein participants and 14.4 pounds put on by the high protein group.

Researchers said that previous studies had led them to expect that a high-protein diet would lead to lower weight gain. Yet despite the differences in protein and fat intake, the level of body fat increased by essentially the same amount among all the participants.

Turkey, chicken, tuna and pork chops were among the protein sources. The menu items were the same for each participant, Dr. Bray said, but a participant on the low-protein diet would have gotten more mayonnaise and less tuna in a tuna fish salad, while the high-protein diet was extra tuna with little mayonnaise.

An editorial accompanying the study said that because the diet increase “the risks of overnutrition beyond that detected by body mass index…the magnitude of the obesity epidemic may have been underestimated.”

The editorial, by Zhaoping Li and David Heber of the Center for Human Nutrition at the David Geffen School of Medicine, University of California, Los Angeles, urged clinicians to focus on “fat reduction rather than simply weight loss” in treating patients with obesity.

Write to Ron Winslow at ron.winslow@wsj.com