What a couple’s therapist is thinking 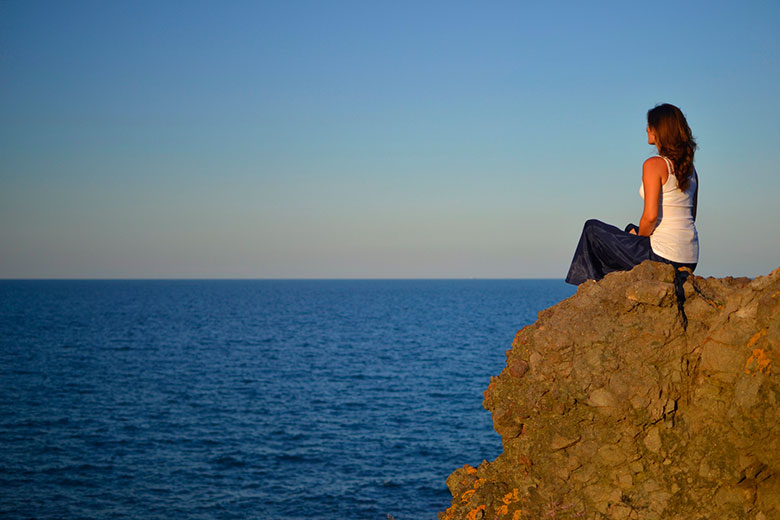 Don’t Apologize So Fast : Best way to make up after an argument

1. Wait to talk until you both are not longer upset

2. Give up the idea you need to be right. Instead focus on how you feel

3. Verbalize your understanding of how the other person feels

4. Quash any impulse to defend you position

5. Accept that it will take a little time to feel better.. Set a time to check in with each to see how things are between you.

Read the full article at this link: by Elizabeth Bernstein WSJ

The divorce rate for people 50 and over has doubled in the past two decades. Why baby boomers are breaking up late in life like no generation before.

By SUSAN GREGORY THOMAS
For years, 51-year-old Dawn and her husband of two decades, Tim, had buried their differences over finances, child-rearing and religion. But when the last of the Wisconsin couple’s three daughters was finishing high school in 2009, those differences were all that Dawn could see. “I had gone back to school to advance my career as a paralegal, and his work had dwindled, so he was just basically hanging out with his buddies,” she says. “We had nothing to talk about, and when we did, it was bickering.”They had stayed together all those years because of the kids, but now nothing was left. “He was so uncompassionate, and I had turned to my religion, and he would never go to church with me,” she says. “I realized that I was alone in the marriage and would be better off with someone whose values and interests were more like mine.” She seized the moment and left, filing for divorce.
While divorce is declining overall, the divorce rate among those 50-plus has doubled over the past two decades. Susan Gregory Thomas on Lunch Break discusses why gray divorce is on the rise.

For the new generation of empty-nesters, divorce is increasingly common. Among people ages 50 and older, the divorce rate has doubled over the past two decades, according to new research by sociologists Susan Brown and I-Fen Lin of Bowling Green State University, whose paper, “The Gray Divorce Revolution,” Prof. Brown will present at Ohio State University this April. The paper draws on data from the 1990 U.S. Vital Statistics Report and the 2009 American Community Survey, administered by the U.S. Census Bureau, which asked all respondents if they’d divorced in the past 12 months.

Though overall national divorce rates have declined since spiking in the 1980s, “gray divorce” has risen to its highest level on record, according to Prof. Brown. In 1990, only one in 10 people who got divorced was 50 or older; by 2009, the number was roughly one in four. More than 600,000 people ages 50 and older got divorced in 2009.

What’s more, a 2004 national survey conducted by AARP found that women are the ones initiating most of these breakups. Among divorces by people ages 40-69, women reported seeking the split 66% of the time. And cheating doesn’t appear to be the driving force in gray divorce. The same AARP survey found that 27% of divorcés cited infidelity as one of their top three reasons for seeking a divorce—which is not out of line with estimates of infidelity as a factor in divorce in the general population.

So what is going on with these baby boomers? Are they finally seeking adventure, now that their kids are out of the house? Are the women exacting their revenge, at last, against the feminine mystique?

The trend defies any simple explanation, but it springs at least in part from boomers’ status as the first generation to enter into marriage with goals largely focused on self-fulfillment. As they look around their empty nests and toward decades more of healthy life, they are increasingly deciding that they’ve done their parental duty and now want out. These decisions are changing not just the portrait of aging people in the U.S., as boomers swell the ranks of the elderly, but also the meaning of the traditional vow to stay together until “death do us part.”

“Some of those marriages that in previous generations would have ended in death now end in divorce,” says Betsey Stevenson, assistant professor of business and public policy at the Wharton School of the University of Pennsylvania, who studies marriage and divorce. In the past, many people simply didn’t live long enough to reach the 40-year itch. “You can’t divorce if you’re dead,” says Ms. Stevenson. 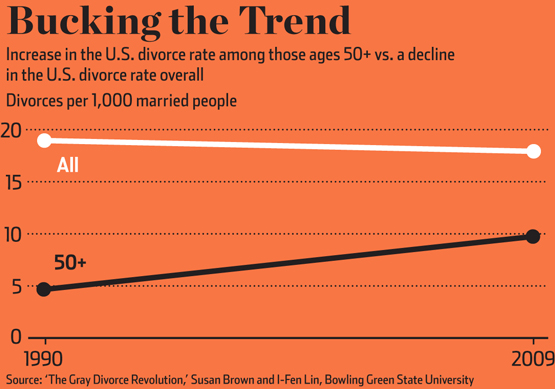 But that’s not the whole story, given that the bulk of the increase in late-in-life divorce has come among people ages 50-64. As a generation, boomers have changed American notions of marriage—and in the process, they have sown the seeds of their own discontent.

Most sociologists argue that boomers entered marriage with expectations very different from those of previous generations. “In the 1970s, there was, for the first time, a focus on marriage needing to make individuals happy, rather than on how well each individual fulfilled their marital roles,” says Prof. Brown, author of the gray marriage paper.

According to Prof. Brown, over the past century there have been three “phases” of American views of marriage. First, there was the “institutional” phase, in the decades before World War II, when marriage was seen largely as an economic union.

This was succeeded in the 1950s and ’60s by the “companionate” phase, in which a successful marriage was defined by the degree to which each spouse could fulfill his or her role. Husbands were measured by their prowess as providers and wives by their skills in homemaking and motherhood.

In the 1970s, the boomers initiated what Prof. Brown calls the “individualized” phase, with an emphasis on the satisfaction of personal needs. “Individualized marriage is more egocentric… Before the 1970s, no one would have thought to separate out the self as being distinct from the roles of good wife and mother.”

None of this is especially surprising for the “Me Generation,” but today’s gray divorces include a generational twist: For many boomers, it is not their first marital split. Fifty-three percent of the people over 50 now getting divorced have done so at least once before.

In fact, more “complex marital biographies,” as Prof. Brown puts it, seem to be one of the driving forces behind gray divorce. Having been married previously doubles the risk of divorce for those ages 50 to 64. For those ages 65 and up, the risk factor quadruples.

For boomers who have had trouble maintaining commitments in the past, hitting the empty-nest phase seems to trigger thoughts of mortality—and of vanishing possibilities for self-fulfillment.

“With the children out of the house, boomers in unhappy marriages often look at each other and think, ‘I may have another 25 to 35 years to live. Do I want to spend it with this person?’ ” says Deirdre Bair, author of the book, “Calling It Quits: Late-Life Divorce and Starting Over,” a chronicle of nearly 400 interviews with people splitting in midlife. “There is an overwhelming, urgent feeling among them of, ‘I have to strike out now, or I’ll never have the chance again,’ ” says Ms. Bair.

Many of those now opting for gray divorces, however, fail to foresee its complications in today’s bleak economic landscape. This is especially true of women. 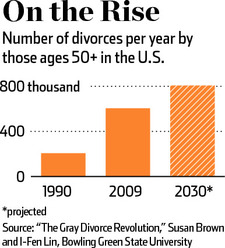 Though homes are often awarded to ex-wives, points out Pennsylvania divorce and family lawyer Elizabeth Bennett, this can be a burden instead of a blessing in a collapsed housing market. And when it comes to obligations to kids for things like continuing education, weddings and down payments on homes, according to Janice L. Green, a divorce and family law attorney in Texas, “it’s always the mother who is willing to give up settlement money that should be on her side of the ledger.”

Divorcing fathers have their own reasons to be concerned. According to a 2003 study from the University of North Florida, they are more likely to see a major decline in contact with at least one child, compared with stably married fathers, whereas divorced mothers tend to get closer to their children.

Still, many older divorcés say they’re happy. According to the 2004 AARP survey, the vast majority of divorcés ages 40-79 (80%) consider themselves, on a scale from 1 to 10, to be on the top half of life’s ladder. A majority of 56% even consider themselves to be on the uppermost rung (8-10). But “being alone” was nonetheless the top fear among both men and women, and those who had remarried reported significantly higher levels of life satisfaction.

So would some of these late-in-life divorcés have been better off trying to preserve their troubled marriages? According to John Mordecai Gottman, founder of the Gottman Institute in Seattle and author of “What Predicts Divorce?,” the behavioral precursors to late-life or empty nest divorce are no different from those for younger couples—criticism, defensiveness, contempt and stonewalling. And, of course, the longer such behavior has persisted, the more deeply ingrained it becomes in a couple’s personal dynamic.

In its work with older couples in crisis, Gottman Institute therapists recommend that spouses “turn toward” each other—that is, that they actively respond to bids for reconnection—rather than, say, snapping: “Excuse me, I’m trying to watch ‘CSI’ here!”

Gray Divorce: What Are the Risk Factors?

Those boomers who can’t manage to hold on to their marriages, though, will hardly be alone. Prof. Brown’s paper predicts that the number of over-50 divorces in 2030, based on current trends, could easily top 800,000 per year. And all those new divorcés shouldn’t have too much trouble finding a date. Indeed, over the past year, the number of dating-site users 50 or older has grown twice as rapidly as any other age group, according to comScore Inc., an online data-analysis and marketing company.

Dawn, the 51-year-old who divorced her husband of 20 years, found her current boyfriend of nine months on the over-50 dating site OurTime.com. He’s a divorcé with no children, and Dawn describes him as “very religious and compassionate, the things I was lacking in my former husband.” Her kids—19, 20 and 26—are less sure, she says. “You can’t expect kids to be excited about a new person who isn’t their dad…But I’m very happy.”

—Ms. Thomas is the author of “In Spite of Everything: A Memoir.”A version of this article appeared Mar. 3, 2012, on page C1 in some U.S. editions of The Wall Street Journal, with the headline: Gray Divorcés.